ExpressCard is PCMCIA's (subsumed by the USB-IF) portable, removable, expansion technology to replace PC Card and PC CardBus (sometimes mistakenly called PCMCIA Cards). ExpressCard holds several advantages over PC Card some of which are enumerated below.

Differences between ExpressCard and PC Card

ExpressCard features new interconnect technology
ExpressCard utilizes two interconnect technologies, the most important of which is PCI Express (PCIe). ExpressCards featuring PCIe 1X technology are capable of 2.5Gb/s per direction, giving an ExpressCard operating in full duplex mode an approximate throughput of 250MB/s x 2, or 500MB/s of throughput, nearly quadrupling the effective speed of 32-bit PC CardBus. ExpressCard alternatively utilizes USB 2.0 for lower speed and less complex applications, with a maximum throughput of 480mb/s.
ExpressCard allows for much more bandwidth
ExpressCards featuring PCIe 1X technology are capable of 2.5Gb/s per direction, allowing for realization of applications, especially host adapters, that underperformed or were impossible under PC CardBus. Examples of full throughput host adapters that bottlenecked CardBus, but don't tax ExpressCard at all are FireWire 800 (IEEE 1394.b) and Gigabit Ethernet (GbE). Additionally, ExpressCard will be able to handle the latest SATAe and other high end buses with relative ease.
ExpressCard has superior power saving and management
ExpressCard operates at lower voltages than PC Card with 1.5 and 3.3V baselines. This allows systems deploying ExpressCard technology to take full advantage of current low power utilization throughout.
ExpressCard is a serial rather than a parallel bus
ExpressCard follows the trend of PCI Express and SATA in transitioning from parallel buses to serial buses. Rather than a 68-pin parallel connection used in PC Card, ExpressCard utilizes a 26-pin beam on blade serial connection. ExpressCard's use of high performance PCIe and USB 2.0 serial connections already built on to host system reduces complexity and eliminates the problems with signal timing associated with parallel buses.
ExpressCard is simpler and cheaper to implement than PC Card
Because ExpressCard harnesses buses that already exist on a host system, it doesn't require a separate ASIC to integrate it to a host system. Unlike PC CardBus and PC Card in which a controller chip was necessary to bridge between the card slot and the underlying system bus, ExpressCard devices literarily plug into either the PCIe or USB 2.0 bus on the system, depending on the ExpressCard type employed. ExpressCard saves in both cost and complexity in this regard.

For PCIe based ExpressCards — in a word, no. However, it is useful to explain why this is the case. 32-bit PC Card CardBus card don't provide enough bandwidth to emulate ExpressCard. Furthermore, ExpressCard cards are completely different from PC Cards in voltages, form factor, physical connectivity and bus technology.

MicroU2E USB 2.0 to USB 2.0 Mode ExpressCard 34|54 Host Adapter
Allows use of USB based ExpressCards with USB 2.0 equipped computers. NOT COMPATIBLE with any PCIe based ExpressCards. Multi-platform support for most modern operating systems.
USB-EXP-ADP-01 | Price: $12.00

MicroU2E-MV USB 2.0 to USB Mode ExpressCard 34|54 Multi-Voltage Host Adapter
Allows use of USB based ExpressCards with USB 2.0 equipped computers. Adds 1.5 Volts at 650mA option to standard model's 3.3 Volts at 1000mA. NOT COMPATIBLE with any PCIe based ExpressCards. Multi-platform support for most modern operating systems.
USB-EXP-ADP-02 | Price: $15.00 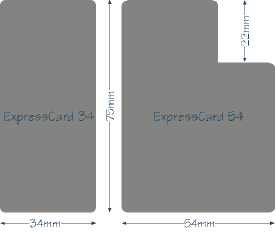 PCMCIA literature has expressed that systems deploying multiple ExpressCard slots should lay them out adjacently on a horizontal plane rather than the "stacked slot" convention employed by PC Card slots. 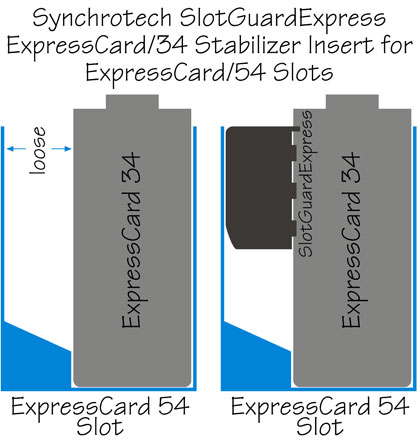 While it may have seemed a sound idea to engineers designing the original ExpressCard standard, one of the more perplexing — and troublesome — aspects of the design has been using ExpressCard/34 cards in ExpressCard/54 slots. In practice, ExpressCard/34 cards, even when properly seated, aren't stable when inserted in the larger ExpressCard slots. The gap between the card and the larger slots allowed cards to be easily dislodged or come loose. This problem is more evident when ExpressCards with large "extended card" portions, and/or with cables attached to them. When cards come loose and disconnect during operation, they drop signal, or worse, can damage the ExpressCard and even the ExpressCard slot. This is especially true for cards providing electrical current, like many Serial I/O ExpressCards.

Available voltages (+1.5V +3.3V) remain the same in ExpressCard 2.0, as do all physical characteristics. Current from various supplies is specified in § 3.3.3 Power Supply Limits of the ExpressCard Standard Release 2.0, which notes that the total max current drawn by a module across all power rails should not exceed 1.75A. Average amperage will be under that threshold.

Currently the only ExpressCard 2.0 capable reader we know of is the Sonnet Echo Thunderbolt to ExpressCard/34 Adapter Pro.

The following table illuminates some of key differences between PCMCIA's PC Card and ExpressCard standards.

Is it possible to add ExpressCard slots to computers with PCIe?

There are a number of PCI Express (PCIe) to ExpressCard host adapters and we stock several models with choices including front and rear slot models. Requiring only a single lane PCIe 1X slot and a spare internal USB 2.0 port, PCI Express (PCIe) to ExpressCard drives provide a fully functional ExpressCard 34|54 slot. A smart investment for switching host adapters and other high performance ExpressCards between notebook and desktop computers, PCI Express ExpressCard drives are simple to install and fully conform to PCIe and ExpressCard standards. Although the PCIe specification provides for hot-swap capabilities, there is very limited support under most operating systems for hot-swapping ExpressCards on a desktop computer. The following documents address this in full:

Are any hot-swap capable external solutions for SxS ExpressCards?

Are any Thunderbolt solutions for ExpressCards?

The Sonnet's Qio device mentioned above provides support for Sony/Sandisk SxS ExpressCard Memory devices on both Mac OS X and Windows, and is available with a Thunderbolt connections to the host system. Supporting a far wider range of ExpressCards than just SxS, Sonnet's Echo Pro, which is a Thunderbolt to single slot ExpressCard 2.0 host adapter. It is the fastest and least expensive Sony/Sandisk SxS ExpressCard on the market. It also works with ExpressCards providing FireWire, eSATA, and specialized audio and video applications from companies like AJA, Matrox, RME, and PreSonus.

Sonnet Echo Thunderbolt to ExpressCard/34 Adapter Pro
Use a range of PCIe 2.0 based ExpressCards on Thunderbolt technology-equipped computers. Allows full 5.0 Gb/s throughput and ingest footage from SxS memory cards at up to 150 MB/s. Works with Mac OS X 10.6.8 and later.
SON-ECHOPRO-E34 | Price: $169.95