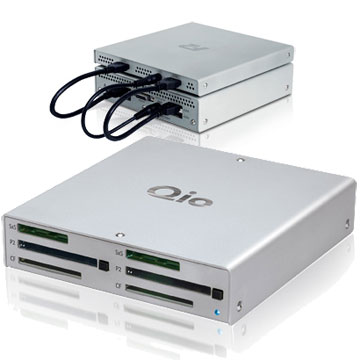 Revolutionary — a word typically used as hyperbole in the technology sector, but in the case of Sonnet's Qio, an appropriate word indeed. The Qio is a new device that fulfills long-standing requests by video professionals using Panasonic P2 and/or Sony/Sandisk SxS memory cards. Qio doesn't just provide slots for one or the other, or even one of each, it provides two slots for each! What's more is the Qio also includes two UDMA capable CompactFlash slots make it indispensable for professional still photographers. Qio also reads memory cards including SDHC using the included 21-in-1 Multimedia Memory Card. Qio reads SxS, P2, and UMDA CompactFlash at their maximum throughput, even when reading two cards at the same time! As if this functionality isn't enough, Qio (pronounced Cue-Eye-Oh) has a built in SATA RAID controller with four eSATA ports for use with a range of eSATA storage devices like Sonnet's Fusion F2 portable raids for on the go transfers between media.

Because the Qio attaches to computers via PCIe, directly on desktop computers, and via ExpressCard/34 on notebook computers, it doubles as a full fledged ExpressCard and PC Card/PC CardBus reader. As long as the drivers for a specific PC Card or ExpressCard are available for your operating system, Qio will let you deploy it with modern systems! You can enable swapping the Qio between desktop and notebook configurations by buying a Qio setup for either desktop or notebook and then purchase a spare Qio interface card for the other machine. Qio even includes a XLR 4-pin adapter cable can route battery power (from third party external batteries, sold separately) to the Qio plus attached Fusion F2's.