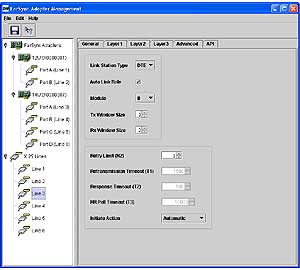 The FarSync XOT Runtime has been developed to provide high performance and very reliable XOT connectivity for system running Windows. Both X.25 SVCs and PVCs are supported with a maximum of 4096 simultaneous connections. A comprehensive Developers Toolkit is included with the product. The API is based on Sockets (compliant with Winsock2) and is compatible with the Microsoft defined X.25 Sockets API. Applications written to use the Microsoft X.25 Sockets API will work with the FarSync XOT product. It supports standard AF_ISO / ISOPROTO_X25 sockets used by a number of applications, such as MS-Exchange. It also supports the AF_X25 address family used by the applications written to use FarSync X.25 products. Applications developed in most programming languages, including Visual Basic, Delphi, C++ and .NET applications, can use the Sockets API to FarSync XOT, and there is a Java Extension API supplied to provide access from Java applications. FarSync XOT Runtime is supported on Windows 7, Vista, XP, Server 2003 and Server 2008. Multi-processor, 32 and 64 bit systems are supported, but for 32-bit applications only (64-bit application support is planned for a future release). The FarSync XOT Runtime for Windows interoperates with the FarLinX X25 Gateway, FarSync XOT Runtime for Linux and other devices complying with the XOT standard.

FarSync W3 Page for this software