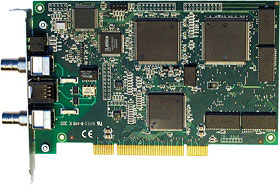 The intelligent FarSync TE1 card brings comprehensive E1 and T1 support to Linux and Windows to allow your application full access to the E1 and T1 features available on the card. Full bandwidth on unstructured T1 and E1 G.703 lines, T1 and E1 fractional (G.703/G.704), HDLC framed and transparent operation are all supported with easy software configuration. The product includes a low level driver that allows access to the communications features available in the hardware. The card can optionally use the host's standard TCP/IP protocol stack to allow access to IP based networks such as the Internet. The FarSync SDK provides a Developers Toolkit for the product. The G.703 transparent bitstream option available with the API is suitable for video and voice such as T-DMB (Digital Multimedia Broadcasting), DAB (Digital Audio Broadcasting) ETI (Ensemble Transport Interface - ETSI EN 300 797). Both the modern RJ48C (RJ45) connectors and the traditional twin coax are available on the card so if you are not sure what connector type is going to be required, use the FarSync TE1.