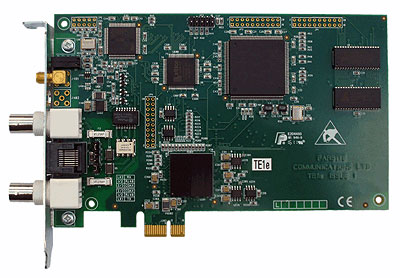 The intelligent FarSync TE1e card brings comprehensive E1 and T1 support to Linux and Windows to allow your application full access to the E1 and T1 features available on the card. Full bandwidth on unstructured T1 and E1 G.703 lines, T1 and E1 fractional (G.703/G.704), HDLC framed and transparent operation are all supported with easy software configuration. The product includes a low level driver that allows access to the communications features available in the hardware. The card can optionally use the host's standard TCP/IP protocol stack to allow access to IP based networks such as the Internet. The FarSync SDK provides the Developers Toolkit for the product. The G.703 transparent bitstream option available with the API is suitable for video and voice such as T-DMB (Digital Multimedia Broadcasting), DAB (Digital Audio Broadcasting) ETI (Ensemble Transport Interface - ETSI EN 300 799) and STI (Service Transport Interface - ETSI EN 300 797) using the BNC connectors. A general purpose bitstream encoding and decoding library including DAB-ETI (NI, G.703) and DAB-STI (PI, G.703), support to reduce application development timescales is available with the FarSync SDK. Both the RJ48C (RJ45) and twin coax (BNC) connectors are available on the card so if you are not sure what connector type is going to be required, use the FarSync TE1e. An external clock input of up to 10mhz through a SMA connector is supported to allow synchronization of the output data clock, to, for example, a GPS source. The product is supplied with a 5 year warranty.

Linux: The API is based on the Char I/O interface and supports bit sync (HDLC) framed and transparent bitstream data. The TE1e adapter can also use the TCP/IP stack to allow access to IP based networks such as the Internet. The TE1e adapter installs seamlessly as a plug and play device under the popular Linux 32 and 64 bit distributions. The cards supports Linux kernel version 2.6.12 onwards in 32 and 64 bit formats, including the leading distributions supplied by Redhat, SuSE, Mandriva, Debian, Ubuntu, Fedora, Slackware, CentOS and more. Multi-processor systems are supported. FarSite is committed to supporting the FarSync TE1e on new versions of Linux and Linux kernels as they are released. The source code for the driver is supplied with the product allowing rebuilding by the end user for use with almost any of the current or future Linux variants. Windows: The Windows based API common to the entire range of FarSync cards/devices is referred to as the FarSync Windows API (FsWinAPI). This is an extension of the MS COMM API and enables, for example, applications developed to support COM ports, to be easily ported to use FarSync support in E1 modes. This standardization enables the API to also be readily accessible from higher level environments such as .NET, C#, VB etc. The FsWinAPI provides applications with direct access to the card's communications port/s for bit sync (HDLC) framing and also transparent bitstream operation for video and voice type applications. The FarSync TE1e can also be installed to appear as a NDIS (LAN) interface so it can simply use the TCP/IP stack over PPP to allow access to IP based networks such as the Internet. The card installs seamlessly under Windows 10, 8, 7, Vista, Windows Server 2016, 2012 and 2008 on both 32 and 64 bit, single and multi-core systems. The FarSync drivers are signed by Microsoft for easy installation. LabVIEW applications can access this adapter.