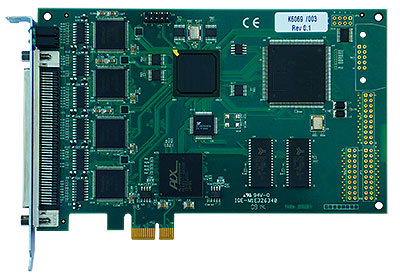 The FarSync T4Ee card and software is designed to provide high performance hardware communications solutions for business, government and military requirements who require a PCI express high capability synchronous communications card to support a range of different line signaling interfaces and highly adaptable control of line clocks. The product includes a low level driver that allows access to the communications features available in the hardware. The comms processing is handled by a FarSite Communications Controller that can be customizable for special use. The card can use the host's standard TCP/IP protocol stack to allow access to IP based networks such as the Internet. The FarSync SDK provides a Developers Toolkit for the product. The T4Ee is a PCI express communications card with four independently configurable sync/async/bisync serial ports. Sync operation supports transparent bitstream and bitsync (HDLC) of up to 10 Mbits/s per line with a total card bandwidth of 64 Mbits/s. The highly flexible universal network connector supports RS232, X.21, RS530 (RS422 signaling), RS485 (2 and 4 wire), RS449 (RS422 signaling) and V.35 network interfaces. Line signaling modes: NRZ, NRZI, Manchester encoding, FM0, FM1 and Conditioned Diphase (Differential Manchester) up to 10Mbits/s are handled as well as soft selectable line termination resistance. One of the unique features of the T4Ee is the variety of clock source options, clocks can be: Internally generated using local clock synthesizers, independently on each line; External from the WAN communications line; Sourced on one port then routed to the others; Multiplied or divided per port to obtain the required rate. The transparent bitstream option available with the APIs is suitable for VoIP (as a subsystem), video and voice such as T-DMB (Digital Multimedia Broadcasting), DAB (Digital Audio Broadcasting) ETI (Ensemble Transport Interface - ETSI EN 300 799).

Linux: The Char I/O API provides a programming language independent, high-level interface to the FarSync base driver it supports access to bit synchronous (HDLC) framed, transparent bitstream and asynchronous data. The cards can also use the TCP/IP stack to allow access to IP based networks such as the Internet. It also allows selection of the full range of clock modes. The link level protocol can be PPP, Cisco HDLC or Frame Relay with optional authentication by CHAP, MSCHAP or PAP (RFC 1334) providing a standard point-to-point network interface. The card installs seamlessly as a plug and play device. The driver supports Linux kernel version 2.6 onwards, including the leading distributions supplied by Redhat, SuSE, CentOS, Debian, Ubuntu, Fedora, Slackware and more. Multi-processor systems are supported. The driver is dynamically loadable so a kernel rebuild is not required for the driver to be installed. FarSite is committed to supporting the cards on new versions of Linux and Linux kernels as they are released. The source code for the driver is supplied with the product allowing rebuilding by the end user for use with almost any of the current or future Linux variants. The driver supports both big-endian and little-endian memory storage formats. A configuration utility is provided to set the line speed, interface type and protocol, after which the ports may be configured with standard networking tools. Windows: The FarSync T4Ee supports a Windows based API, common to the entire range of FarSync cards/devices, it is referred to as the FarSync Windows API (FsWinAPI). This is an extension of the MS COMM API and enables, for example, applications developed to support COM ports, to be easily ported to use FarSync support in synchronous or asynchronous modes. This standardization enables the API to also be readily accessible from higher level environments such as .NET, C#, VB etc. The special clocking features are all accessible though the FsWinAPI. Async operation support is also provided by the Win32 COMM interface as well as FsWinAPI. The FsWinAPI provides applications with direct access to the card's communications port/s for bit sync (HDLC) and bisync framing and also transparent bitstream operation for video and voice type applications. The FarSync T4Ee can also be installed to appear as a NDIS (LAN) interface so it can simply use the TCP/IP stack over PPP to allow access to IP based networks. LabVIEW applications can access this card. The product is supplied with a comprehensive configuration utility, a typical screen is shown. The lines can be reconfigured and restarted without reloading the software. There is context sensitive help and an on-line manual should it be required. An advanced tab permits users to further specify the configuration of the line if necessary. The product is supplied with its own Line Monitor that allows the user to record, display and store line traffic with WAN protocol decoding for fast debugging.