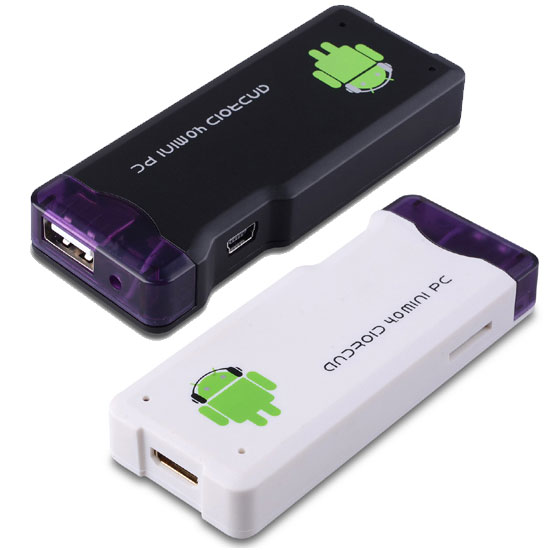 MK802 is a fully functioning computer that is roughly the size of a large pack of gum. Connect an existing keyboard and mouse, and the Mini PC is ready to go. With essential built-in ports, slots, and included cables, the MK802 is ready to plug into a HDMI monitor or HDMI TV. The MK802 Android 4.0 Mini PC comes with comes with Google's Android™ 4.0 (Ice Cream Sandwich) Operating System onboard, meaning it's ready to run all the latest tablet and smart-phone apps*. Best used as a smart TV Player, the MK802 Android 4.0 Mini PC provides HDMI output in either 1080P or 2160P. Despite its diminutive size, MK802 is packed with features, and is expandable via its microSD/MicroTF slot that can accept up to 32GB storage cards. Built-in WiFi means it's ready to connect to hotspots, or use a USB to Ethernet adapter to plug into wired networks. MK802 can run of USB power, or use the included power supply.

As an Android device the Mini PC has access to so many entertainment applications, that it's a full fledged entertainment center. Video, music, games, and so much more all in this diminutive device. The MK802 provides seamless access to Netflix, Pandora Radio, YouTube, Flixster, Vimeo, Crunchyroll, TED, HBO GO, Crackle, and others. Enjoy games** for Android on the MK802 like Angry Birds Space, Cut the Rope, Fruit Ninja, and others. Full web browsing, Google Maps, favorite Social Networking apps, photo sharing sites, and many more. Hobbyists and advanced users are bound to find hundreds of uses for the MK802 Android 4.0 Mini PC.

* Excluding some apps that require inputs only via accelerometer (eg. tilting, turning, or shaking inputs). Several apps also allow for keyboard inputs to substitute for these actions.
** Apps including games that have been written for portrait mode only (eg. taller than wider) are not really suitable for display on a television or landscape monitor.

Using the MK802 Android 4.0 Mini PC Smart TV Players on a wired network
Prefer an Ethernet connection to the MK802? Here's how to do it.

MK802 Android 4.0 Mini PC's as a potential music server
Hobbyist project for MK802
Android is a trademark of Google Inc. The Android Robot is licensed under Creative Commons.